Emergency currency: the first gold ‘coin’ made in Australia from Australian gold

Around 200 Adelaide Pounds have survived from the mid-nineteenth century making the opportunity to secure such an important piece of colonial numismatic history rare indeed.

That’s why we’re very excited to be able to offer collectors a superior grade example of this coveted Australian coin. 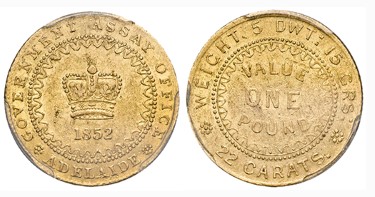 So special are Adelaide Pounds that they are sought after throughout the world. It’s not just their rarity that makes them so interesting. Part of their mystique is wrapped up in the story of how they came to be made – a tale which goes to the heart of Australia’s pioneering spirit.

Following the 1851 discovery of gold in the neighbouring colony of Victoria, an estimated 8,000 men left the South Australian capital of Adelaide in the hope of making their fortune. Not only did the migration create a labour shortage back home, but in taking a large share of circulating coins with them, the men left the colony’s fledgling economy near ruin.

When lucky prospectors began returning home with gold nuggets, however, the South Australian government spotted an opportunity it believed would solve the coinage crisis. In an admirable example of Australian ingenuity – and without official consent from British Imperial authorities – it sought to make ‘emergency currency’ in the form of its own gold coins.

The Adelaide Assay Office was established under the hastily enacted Bullion Act of 1852. At first it made irregularly-shaped ingots, but on 23 September 1852 it began production of round 22-carat Adelaide Pounds. Disastrously, the die cracked almost immediately. No example of Type One is known today without some evidence of the die crack.

A second die cut by local engraver Joshua Payne was rushed in to service, successfully producing nearly 25,000 examples of the Adelaide Pound Type II. But fate took a hand in its short-lived existence.

Unfortunately, by infringing upon the Royal prerogative to coin gold, South Australia’s Adelaide Pound was technically illegal. Its creators felt the time involved in gaining permission from London to establish a mint was too great a risk to the economy. By the time approval was received, production had ceased anyway thanks to the arrival of a shipment of official sovereigns.

What really accounts for the rarity of the Adelaide Pound today, however, was a spike in the price of gold. At one point, it contained gold worth nearly two shillings above face value. Consequently, most of the coins were melted down for their intrinsic value.

Nevertheless, the Adelaide Pound was the first ‘coin’ produced in Australia from Australian ore with an entirely Australian design.

The dramatic story of its rise and fall has helped cement its position in Australia’s national consciousness alongside other ‘greats’ such as the 1813 Holey Dollar and Dump, 1855 Sydney Mint Sovereign and 1930 Penny.

With this professionally graded example you could hold gold rush history in your hand – one of the rarest and most significant coins in Australian numismatic history. Tell us why you’d like to take your collection to a new level with one of the few Adelaide Pounds still in existence.
Back
Previous Next