The 1930 penny is easily Australia’s most forged 20th century coin.

Amateur and professional counterfeiters alike have turned their hand to producing this popular Australian icon, and many collectors have been deceived over the years.

Given the potential risk involved, prospective buyers are advised to become aware of the basic points to look for when determining a coin’s authenticity.

As with any numismatic issue, there are certain characteristics of the design, strike and wear which are unique to the 1930 penny. Once these are learned and identified, much of the risk related to buying a 1930 penny is reduced. 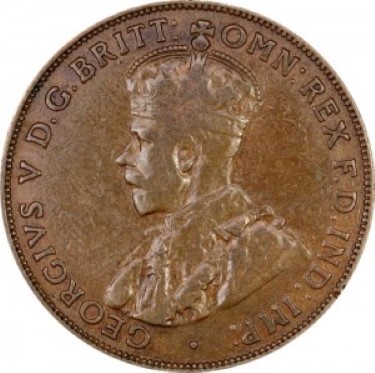 Two different obverse dies were used in the production of 1930 pennies, each with unique identifying characteristics. Nearly all known examples were struck with what is known as the “Indian” obverse die; our research indicates that just two 1930 pennies struck with the “London” obverse die have been sighted.

The “Indian” die can be identified by examining how the legend aligns with the outer beading: the final upstroke in the “N” of “OMN” sits neatly in line with an outer rim bead, whereas the same point on coins struck with the “London” die align between the outer rim beads. The colon following “IMP” is consequently aligned between two beads, rather than in line with one as on the “London” die. 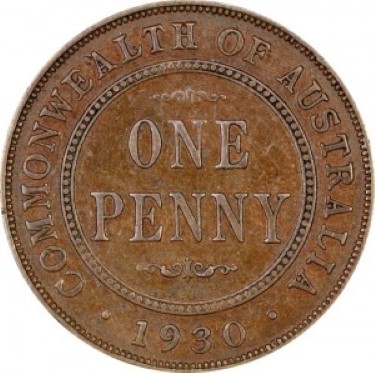 1930 pennies are often forged most obviously through the alteration of the date. The zero in the date of a genuine 1930 penny will exhibit a fat and wide “0”, while most forgeries tend to show a more elongated and narrow “0”. Any visible evidence of tampering with the coin, such as a slight difference in surface colour or any scratch, dent or mark around the date should give cause for caution.

Although this guide contains much more about counterfeit 1930 pennies than a layman would know, it can never be enough to guard completely against counterfeits and forgeries. If you are looking to buy or sell a 1930 penny, ensure you deal with a member of the Australasian Numismatic Dealer’s Association (ANDA), who are experienced dealers bound by a strict Code of Conduct.