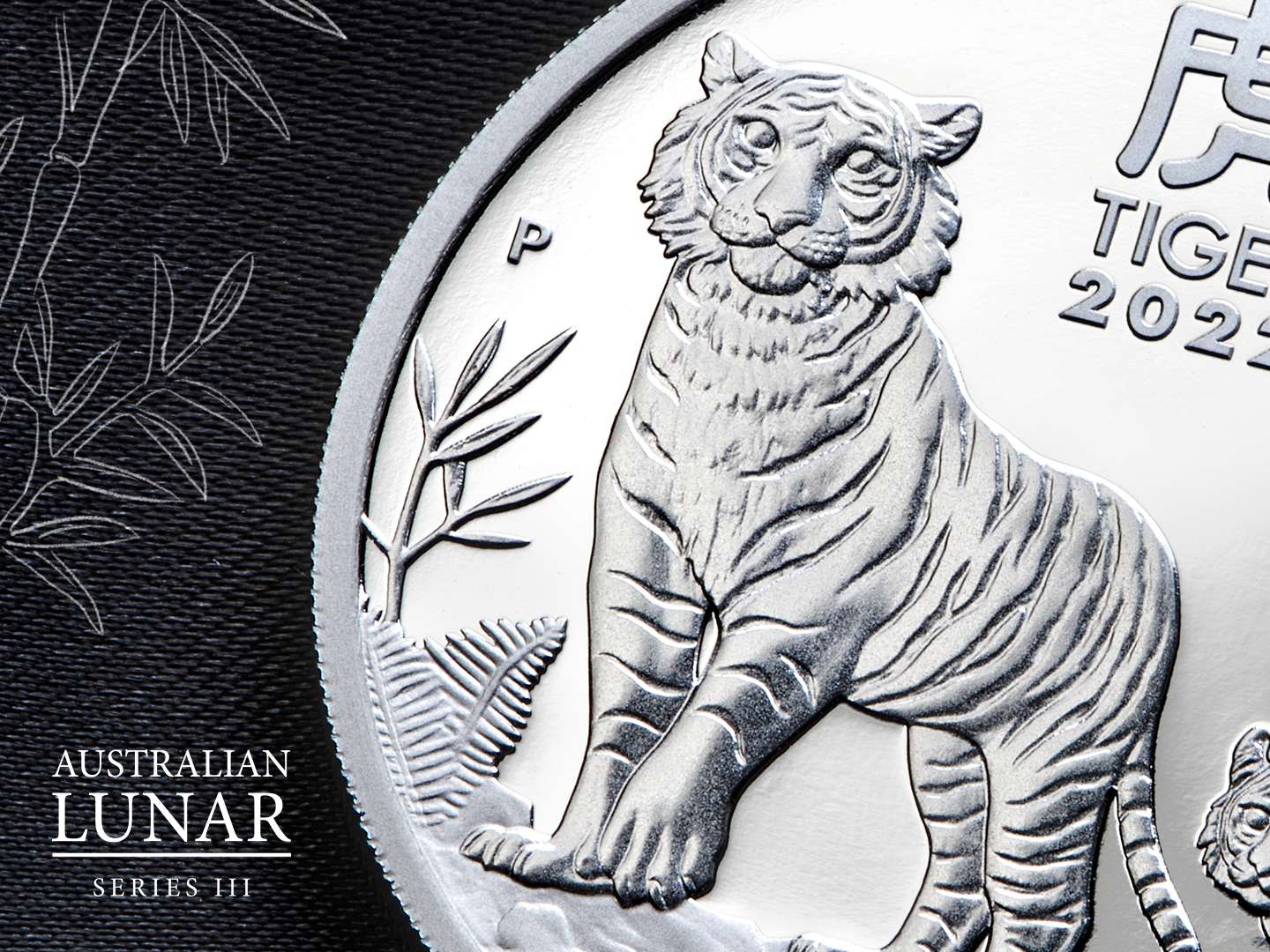 The Perth Mint is delighted to offer a stunning suite of collectables celebrating the Year of the Tiger, which begins on 1 February 2022.

According to Chinese tradition, thousands of years ago the Emperor divided the measurement of time into 12 years coinciding with monthly cycles of the Moon’s phases. He then decreed that each year in his lunar calendar would be overseen by an auspicious animal. Like the zodiac signs of Western astrology, each one would exert influence over people born during its ascendancy.

According to a popular version of the lunar legend, the animal’s position in the calendar was determined by a ‘Great Race’. Towards the end of the challenge, the competitors crossed a fast-flowing river. With its surprising affinity for water, the tiger seized third place behind only the mouse and ox.

The Year of the Tiger

The magnificent big cat is believed to endow qualities such as determination, courage, confidence and charm on those born under its influence. Adherents seek guidance in the zodiac’s ancient lore on topics such as health, wealth and careers. Perhaps most keenly desired are details relating to personal compatibility. It’s said ‘tigers’ will find their best match in people born under the sign of the horse, with whom they’re likely to share many common goals.

Launched back in 1996, the Australian Lunar coin series continues to be a popular way to mark the return of each animal during the calendar’s 12-year cycle.

Internationally renowned for their quality, purity and design, flawlessly struck Proof Lunar coins are sought by series collectors and often gifted as keepsakes to family and loved ones.

In 2022, pure gold and platinum coins depict a fearless tiger standing on a peak with its open jaws displaying razor sharp canine teeth. Pure silver coins portray a tiger cub following its proud and protective parent across a rocky terrain.

With the mintage of each piece extremely limited, there’s always a race among collectors to secure these remarkable releases!

Tiger fans will also be excited by these unique low mintage alternatives:

Antiquing is a treatment we use to tone the natural lustre of silver coins before individually hand finishing them to imitate the surface abrasions often seen on ancient artefacts. Used to stunning effect on this beautiful coin, it’s a fitting reminder that the lunar calendar is thousands of years old.

One of the Four Symbols that each protect one quarter of the heavens, the White Tiger is the legendary guardian of the West. According to traditional stories, it was destined to appear whenever there was peace in the world.

This spectacular collectable comprises four fan-shaped legal tender pieces which align in the shape of an ancient Chinese ‘ban liang’ coin. Each silver release portrays one quadrant of an intricately coloured composition of mighty tigers by a tropical rainforest waterfall.

With its creative use of authentic Australian opal in the shape of a tiger, this pure silver coin makes an outstanding keepsake. The design includes representations of cineraria flowers – lucky omens for those who believe their lives are influenced by the sign of the tiger.

View all Lunar coins
Back
Previous Next