An Australian amateur prospector has made world headlines after unearthing a gold nugget weighing 5.5kg (177 troy oz) near Ballarat in Victoria.

Said to be worth around AUD 300,000, it was found using a handheld metal detector.

The area surrounding Ballarat has been extensively explored since the Victorian gold rush began in the 1850s – making a find of this size absolutely extraordinary.

Despite its impressive dimensions, however, the hunk of gold is a mere tiddler in Australia’s league of giant nugget discoveries. Around 245 gold nuggets found in Australia are known to have been bigger.

The granddaddy of them all was found 100km further north at Moliagul in 1869. The whopping nugget, known as Welcome Stranger, weighed approximately 72kg (2,315 troy oz). It remains the largest gold nugget ever discovered. 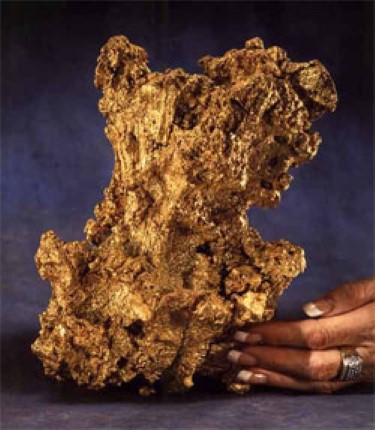 Prospectors frequently bring small gold nuggets they’ve discovered into the Mint for an estimate of their value. We are also a regular buyer.

If you want to see a really spectacular example, Newmont’s Normandy nugget is on display in our  Perth Mint Gold Tour.

Found near Kalgoorlie in 1995, the 25.5kg (819 troy oz) specimen is the second largest nugget in the world today having escaped being melted down, and is the 26th largest gold nugget ever discovered.