It had been known since 1851 that the gold being mined in Australia was of greater purity than that standard in London, and  that the natural alloy in which it was found included a predominance of silver.

This was rather different to the copper alloy that the Royal Mint used to harden the gold it used when producing sovereigns.

This fact was borne out by the Royal Mint’s “Trial of the Pyx” in 1856, which showed that the Sydney sovereigns surveyed included on average 0.02% more gold than the London standard required.

Although the percentage of silver in the alloy used for sovereigns at the Sydney Mint was higher than that used in London, the cost of the technology employed in extracting it in 1855 did not make it financially viable to do so.

The fact the amounts of extra gold and silver in each Sydney Mint sovereign was extremely modest did not prevent them from being coins of choice with hoarders around the globe. Anecdotal stories of Asian merchants, French peasants and Chinese traders (among others) preferring Sydney sovereigns to those from London abound in the historical literature.

Francis Boyer Miller was one of two full-time assayers employed at the Sydney Mint, his brother was a non-resident assayer to the Royal Mint in London, and also Professor of Chemistry at King’s College, London.

Francis Miller’s technique for extracting the silver involved the use of chlorine gas: the “Miller Process” involves blowing a stream of chlorine gas over and through a crucible filled with molten impure gold. Impurities in the gold form chlorides before the gold does and these insoluble salts are removed from the melt by skimming the surface.

This process was so effective at extracting additional gold that the Royal Mint paid a bonus of £2,000, being for the exclusive rights to use his process in Victoria. To put this royalty in context, Miller had an annual retainer of £100 when he joined the Sydney Mint in 1853.

Miller patented his process in London in 1867, and conducted a range of experiments at the Sydney Mint throughout 1868 in order to prove the commercial viability of the process. 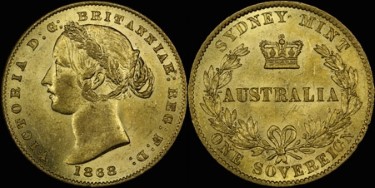 Evidence of the gradual introduction of Miller’s process can be seen in the characteristics of many sovereigns struck at the Sydney Mint in 1868.

Mint-state sovereigns struck from the natural Australian alloy prior to the introduction of Miller’s process generally have a bright, straw-yellow patina, often with hints of green.

When compared to sovereigns struck earlier in 1868, the first Australian sovereigns with the precise Royal Mint standard of purity exhibit a distinctly warmer, rose-coloured patina.

It is interesting to note that the Royal Mint correspondence registers from this period yield concerns that the higher proportion of silver was causing the Sydney sovereigns to wear thin in an untimely manner.

It is perhaps ironic that Francis Miller’s research into the chlorine refining process determined that the softness in design being observed in London was not due to wear, but actually by the minting technique – a slight “flow” of metal tended to smooth out Victoria’s portrait.

Although Miller’s research could not support any argument there could have been against the continued use of the designs unique to the sovereigns of the Sydney Mint, as his refining process now meant that there was complete metallurgical uniformity across all sovereigns issued by each of the branches from 1868 onwards, which ultimately led the Secretary of State for the Colonies to conclude that:

“My Lords see no reason why coins struck at the Sydney Mint should not bear the same design as those issued from the Mints in London and at Melbourne ; and they will therefore be willing to submit to Her Majesty an Order in Council, giving effect to the wishes of the Government of New South Wales in this respect.”

The 1868 Type II Sydney Mint sovereign is therefore a true turning point in Australian numismatics – not only are some the last sovereigns struck with the “native Australian alloy”, they are also the first that can unequivocally be said to be struck to the exact same specifications as those issued by the Royal Mint in London.