Notably, there’s no direct reference in the design to Edward Hargraves, the man awarded £10,000 and feted as a hero for discovering Australia’s first goldfield.  Thereby hangs a tale.

Hargraves, a veteran of the California goldfields, returned to Australia in January 1851 and travelled to central western New South Wales in search of gold. There he met John Lister and brothers William and James Tom, teaching them how to ‘pan’ and ‘cradle’ for gold. 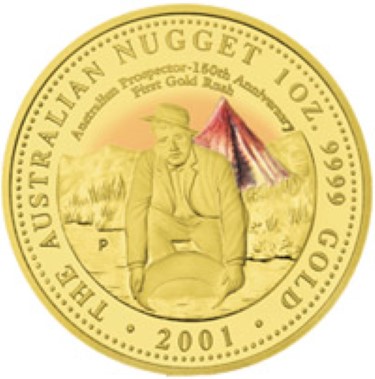 On 12 February 1851, Hargraves found a few specks of gold, whereupon he took off for Sydney to lodge his claim to be recognised as the first discoverer of gold in Australia. But the NSW government rejected it on the grounds that the specimens were too small and that there was no proof of where they came from.

Lister and the Tom brothers, meanwhile, continued the search and on 7 April 1851 found four ounces of gold downstream of the original find. The trio sent word to Hargraves, who hastily returned to verify their discovery. With the payable gold in his hand, he left for Sydney once again to pursue his claim.

This time, Hargraves satisfied the Colonial Secretary and a government-appointed geologist. He was proclaimed as ‘the sole and first discoverer’. With his large cash reward came the position of Commissioner of Crown Lands for the gold districts and later an annual pension of £250.

While Hargraves could afford to live and travel in style, he failed to share the reward with the men who actually found the gold. Understandably, it led to a long a bitter dispute, which played out over several decades before their in part in the discovery was formally recognised. Finally, in 1891, a NSW Parliament Select Committee pronounced John Lister and the Tom brothers as “undoubtedly the first discoverers of gold obtained in Australia in payable quantity”.

There has been an interesting development since we published this story in 2011. William Tipple Smith has been officially recognised for his even earlier discovery of gold in New South Wales.