The Western Australian Centenary 1929 medals were struck at the Perth Branch of the Royal Mint from 1½ inch (38mm) dies produced in England.

The designs were also created in England. 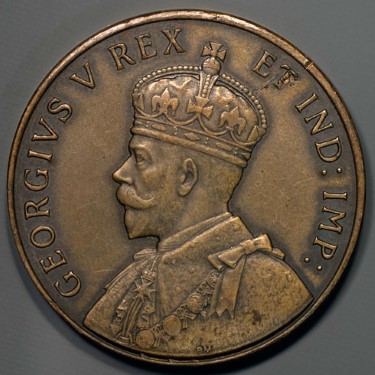 The obverse side of the medal showing the crowned bust of the then reigning monarch, King George V., was designed by Sir Bertram Mackennal, an Australian artist resident in England.

Western Australians were familiar with Sir Bertram’s work because he had also been responsible creating the Lord Forrest statue sited at King’s Park, Perth.

Mackennal’s initials B.M. appear to the right of centre at the base of the King’s bust. The legend, GEORGIVS V REX ET IND IMP, is quite an unusual choice, and was only used for a very brief time on Canadian coins back in 1911.

The reverse design, by English heraldic artist George Kruger Gray, is that of an energetic and vigorous Black Swan, the bird emblem of Western Australia.

This design was selected because it was thought to portray the spirit and character of the State at the time. The design was progressive in appearance, a bold choice with support from Mint officials both here and in London, but it was not without its critics. 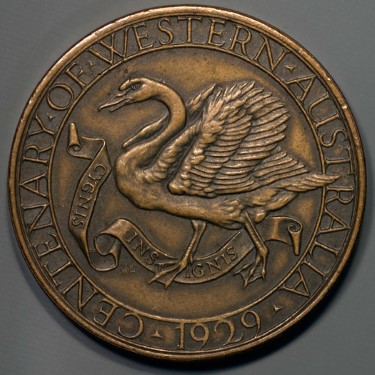 Three other reverse designs had also been presented for appraisal, which included another by Kruger Gray, and two by Hugh Paget showing a traditional treatment of a graceful swan on tranquil water.

All four of the reverse designs included the State’s motto “Cygnis Insignis” (renowned for its Swans), and the words “Centenary of Western Australia 1929”.

Kruger Gray also designed the crest and coat-of-arms for the University of Western Australia. Kruger Gray’s initials K.G. can be seen to the left of the Swan’s front foot below the fold in the ribbon.

The first medal was struck in an official ceremony on 15thMarch, 1929, by Lady McMillan, the wife of the Lieutenant-Governor. The next two medals struck were made of silver and were presented to Lady McMillan and Mrs. Ellen Collier, the wife of Premier. 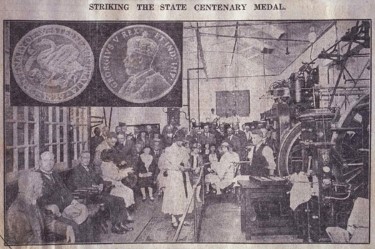 It is reported that the press then began to make bronze medals at a steady rate of 40 per minute. The first medal struck, and two others described as bronze coloured, were then mounted in a piece of polished jarrah by Mint staff, and presented to the Museum of Western Australia.

The first medal struck had a surface analysis performed on it by staff of the University of Melbourne in 2013, and interestingly it was found to contain about 79% copper, 16% zinc and 0.6% nickel.

Melbourne Museum has a Western Australia Centenary medal in its collection which it identifies as being made of tombac, and an analysis of its makeup produced similar results to that of the first medal.

Tombac, or “Dutch Gold”, is a Copper/Zinc alloy with a higher level of Zinc, which was suited for use in medals because of its faux-gold appearance. 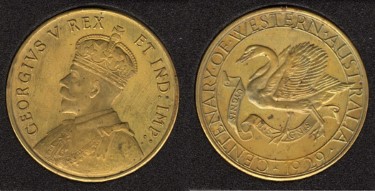 Most of the common bronze medals sampled have a copper content of around 90%, with zinc around 5-7% and only a trace of nickel.

The medals have a diameter 38mm, and have a thickness of 3.5mm. The weight of the medals vary, but typically the tombac medals weigh around 30 grams; the bronze medals, 32 grams; the silver medals 39 grams; and the gold medals 62 grams.

How The Perth Mint came to mint a gift for King George V in 1829.

Here's what happened to all the medals produced in celebration of Western Australia’s Centenary in 1929.