What happened to all the medals produced in celebration of Western Australia’s Centenary in 1929?

Approximately 85,000 medals were struck at the Perth Branch of the Royal Mint to commemorate the Western Australian Centenary in 1929, and about 85% of these were distributed to the school-aged children of the State. Bronze medals celebrating the Centenary of Western Australia were presented to more than 70,000 school children in 1929.

Friday 13th September, 1929 was earmarked as the day for local communities to celebrate “Children’s Day”, and with speeches and performances in the morning, followed by sporting carnivals in the afternoon, the format for the day was pretty consistent throughout Western Australia.

In one of the exceptions though, the older students from the hills town of Jarrahdale were able to visit The Perth Mint on that day to see how the medals, that they had received the night before, were made.

The State Government provided one shilling for each child on the school roll to help feed and entertain them. Local community groups raised additional funds to make the day a very exciting and memorable day of celebration for the children which would last long in the participants’ minds.

It was a day to acknowledge the contributions from those people that had built their communities, to reinforce the need for hard work and self-improvement, and to instil a positive outlook for the future prospects of the children, and their State.

When addressing 800 or so children at Busselton, William Mann, M.L.C., said that they should treasure and care for their Centenary medals, and although those present would not see the next centenary, those medals that have been handed down for posterity would have their true value realised. 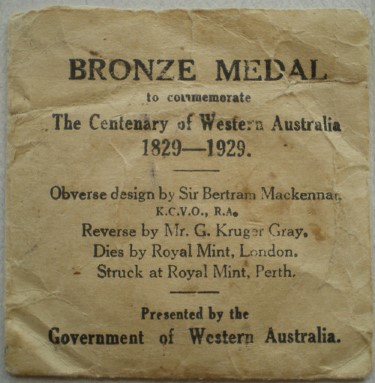 Each child was presented with a bronze medal in small buff coloured envelope made for the purpose. This envelope was different to envelopes used for the medals that were sold, and on this type of envelope the price of a bronze medal is given as one shilling. Local Roads Boards were able to provide bronze medals to children, too young for school, at the subsidised price of threepence.

About 9,000 bronze medals were sold, either by the Mint, or with the assistance from the Banks, through their extensive state-wide branch network.

For a period, The Perth Mint, at the request of the Government, suspended sales of the bronze medals so as not to devalue their appeal to the children. It was expected that they would not receive their medals until later in the year.

A special type of bronze medal was struck for the oldest residents in the State, and a local daily newspaper published details of those recipients on a regular basis. Another 94 of the special bronze medals in cases were awarded to winners at the Royal Agricultural Society’s Centenary Show.

Just less than 900 silver medals were struck, but only a number around 660 were ever issued. Almost as many were presented as gifts to significant organisations and people outside of Western Australia as were sold within. The cost of each silver medal was seven shillings and sixpence.

An example of the Centenary medal struck in silver.

Three gold medals were struck and the whereabouts of two of these medals is known. One gold medal was commissioned by Perth City Council and sent to Perth, Scotland. Another gold medal, struck very late in the Centenary year, for the W.A. Historical Society, was sent to the man depicted on the obverse side of the medal – King George V.

How The Perth Mint came to mint a gift for King George V in 1829.

The Western Australian Centenary 1929 medals were struck at the Perth Branch of the Royal Mint, from 1½ inch (38mm) dies produced in England.