How The Perth Mint came to mint a gift for King George V.

Midway through the Western Australian Centenary Year of 1929, the Deputy-Master of the Royal Mint, Perth Branch, Major Hugh Corbet, suggested that a gift of a gold replica of the Centenary Medal should be sent to King George V.

This idea was taken up by the Western Australian Historical Society, which set up a Shilling Fund for the purpose, and sought donations from the descendants of pioneer families. A ‘pioneer family’ was deemed to have been one who had arrived in the Swan River Colony before 1850.

In the following weeks there was a steady flow of small donations, and in the first week of December there was £12/1/ in the fund. Convener Vern Hamersley had concerns that they wouldn’t get much of a medal with that amount. The cost of a W.A. Centenary Medal weighing 2.2 ounces, struck from locally mined and refined gold, was quoted at £11.

On Tuesday 17th of December, 1929, a Vice-President of the W.A. Historical Society, Edith Cowan, performed the ceremonial ribbon-cutting to strike the King’s medal. By this time about £17 had been collected, and local manufacturing jeweller, J.C. Taylor, was given the task of creating an artistic presentation of the medal.

The medal was embedded into a round wooden base made from local timbers, and surrounded by an inscribed circlet of gold which featured cut outs of gum leaves. The message engraved onto the circlet is quite lengthy, and the workmanship is outstanding.

The finished work was put on display in Taylor’s premises in Forrest Place, Perth, in the second week of the New Year, before it was then despatched to King George on January 20.

On April 22 the Governor of W.A., Sir William Campion received a despatch from the Secretary of State for the Dominions (Lord Passfield) acknowledging the King’s appreciation and pleasure at receiving such a beautiful gift and sentiments of affection.

From records held at the Royal Western Australian Historical Society, at the time of sending in her donation Maude Sanderson of Lesmurdie, had concerns that the medal would get lost in amongst the other curiosities she had seen in the corridors of Windsor Castle.

In 2014 the Royal Collection Trust placed an image of the gift in its online catalogue, and even though it is catalogued as “Box and Cover 1929” its historical significance is no less diminished. By publishing the image, concerns that the item had been misplaced, or even worse, damaged in the Windsor Castle fire of 1992, were dispelled.

The gold Centenary Medal is mounted with the obverse showing, which is quite unusual, because the main reason for providing the present was to commemorate Western Australia’s Centenary. The medal cannot be removed from its mounting.

Trust staff were also able to provide an answer to that question, finding on inspection that a bronze Western Australia Centenary 1929 Medal showing the reverse “rampant swan” is embedded on the underneath side of the mounting block. 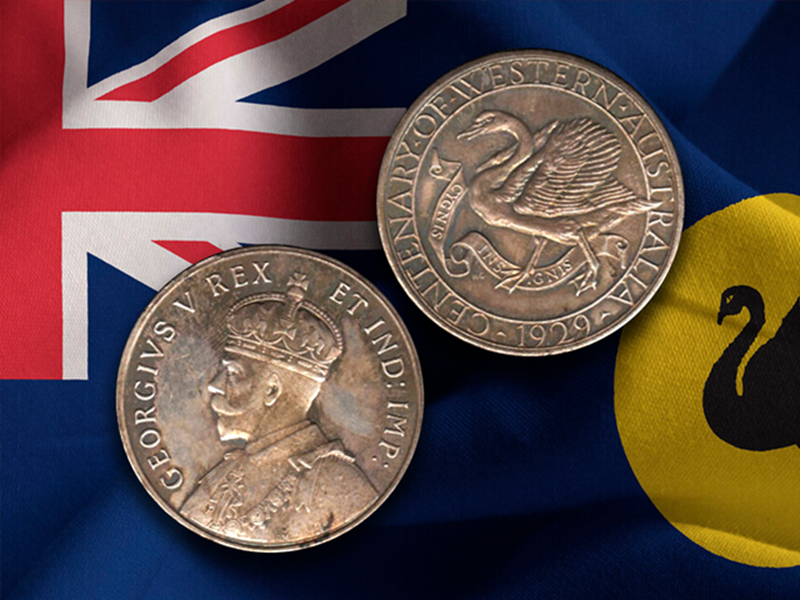 Here's what happened to all the medals produced in celebration of Western Australia’s Centenary in 1929.

The Western Australian Centenary 1929 medals were struck at the Perth Branch of the Royal Mint, from 1½ inch (38mm) dies produced in England.